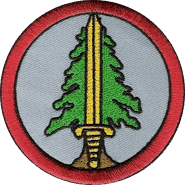 Several months ago Red Bull began sending out these funky electronics kits to various hackerspaces. Each kit contained an invitation to the Red Bull Creation Challenge. The rules are pretty simple, your entry has to be bigger than a bread box but smaller than a box truck and must incorporate an Arduino microcontroller. Most hackerspaces got theirs months ago and had tons of time to work on their projects; we got ours 2 weeks ago. So after some quick brainstorming we put together a team consisting of Londo, Converge, Jake, and Alex.

The four of them in turn came up with this: It's an old Mac that's been gutted and fitted with an Arduino controlled rear projection screen. The Arduino flashes a series of 8-bit Black Lodge Research logos while playing some 8-bit tunes. Sadly the LED lamp in this thing is so bright that it's actually hard to get pictures or video of it. With your eyes, however, you cannot see it. I'm sure one of our photographer geeks could figure out a filter that washes some of that out so we can get better video.

The project got submitted at the 11th hour, but it is in. With any luck we'll hear something back soon. Congrats to the team!